Apple is Adding the SD Card Reader Back in Upcoming MacBook Pro: Report 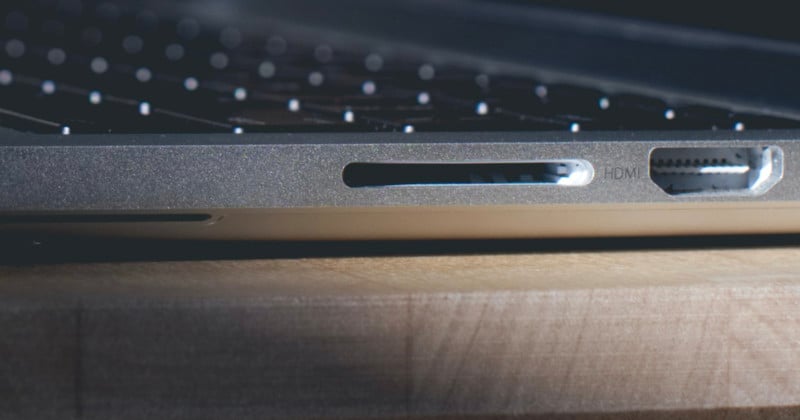 Bloomberg’s Mark Gurman is a well-respected journalist who has a very strong record when it comes to rumors, and his latest promises the return of a port that photographers have been yearning to see: the SD card slot is coming back to the MacBook Pro.

While Gurman’s latest report focuses on a lighter and thinner design for the MacBook Air (which will also include MagSafe in a total reboot of the line), for photographers he buried the leade: the real news is the return of the SD card port on the upcoming 14- and 16-inch MacBook Pros.

Apple is planning for the return of the SD card slot in the upcoming 14-inch and 16-inch MacBook Pros. This is looking like the “fix everything” edition – with MagSafe also returning and the Touch Bar going away. https://t.co/kOpqkSYds0

Gurman refers to the upcoming models as the “fix everything” edition, which will see the removal of the maligned TouchBar and the reintroduction of both MagSafe and an SD card port.

As mentioned, the report also notes that the MacBook Air is getting a redesign to get even lighter and thinner, although to what degree is not mentioned. Gurman mentions that these changes will not replace the current MacBook Air that was just announced but exist as a more premium alternative. He also mentions that these new MacBook Airs will likely come after the release of the new MacBook Pros, and could arrive as late as 2022.

In his previous set of rumors, Gurman also reported that Apple would be releasing a more compact version of its Mac Pro as well as a more affordable version of its Pro XDR Display. On top of that, the iMac is finally getting a much-needed redesign.

It appears that along with moving towards getting its own in-house silicon inside its devices, Apple is using this opportunity to revamp its entire computer lineup. This kind of “fix everything” approach combined with how well the latest devices run thanks to Apple Silicon is likely going to make Apple’s computers all the more desirable. If these rumors come to fruition, not only will Apple have a host of devices that are powerful enough to appease creative professionals, they will also have the kind of hardware features that photographers and videographers demand.

Of all the cosmetic imperfections you might be asked to retouch, one of the most common by far is dark circles under the eyes....
Read more
Photography

Could you do it? The iPad comes with a variety of absolutely fantastic features, it has a beautiful screen, and the tablet-editing experience can...
Read more
Photography

Computational imaging is all the rage these days thanks to smartphone cameras pushing the field forward, and now Leica is doing its part...
Read more

How to Recharge Mobile From PhonePe App Through UPI

PhonePe is a digital payments platform that was founded in 2015 and acquired by Flipkart in 2016. The app was released in...
Read more
Load more

Spring Fashion Show at the University of Michigan Has Started

Top Fashion Trends to Look for in Every Important Collection

The News Nets Multimedia has an unequalled network of news gathering resources from all over the world. TNN Digital is the world online news and information and seeks to inform, engage and empower the world.

We use cookies on our website to give you the most relevant experience by remembering your preferences and repeat visits. By clicking “Accept”, you consent to the use of ALL the cookies.
Cookie settingsACCEPT
Manage consent

This website uses cookies to improve your experience while you navigate through the website. Out of these, the cookies that are categorized as necessary are stored on your browser as they are essential for the working of basic functionalities of the website. We also use third-party cookies that help us analyze and understand how you use this website. These cookies will be stored in your browser only with your consent. You also have the option to opt-out of these cookies. But opting out of some of these cookies may affect your browsing experience.
Necessary Always Enabled

Any cookies that may not be particularly necessary for the website to function and is used specifically to collect user personal data via analytics, ads, other embedded contents are termed as non-necessary cookies. It is mandatory to procure user consent prior to running these cookies on your website.